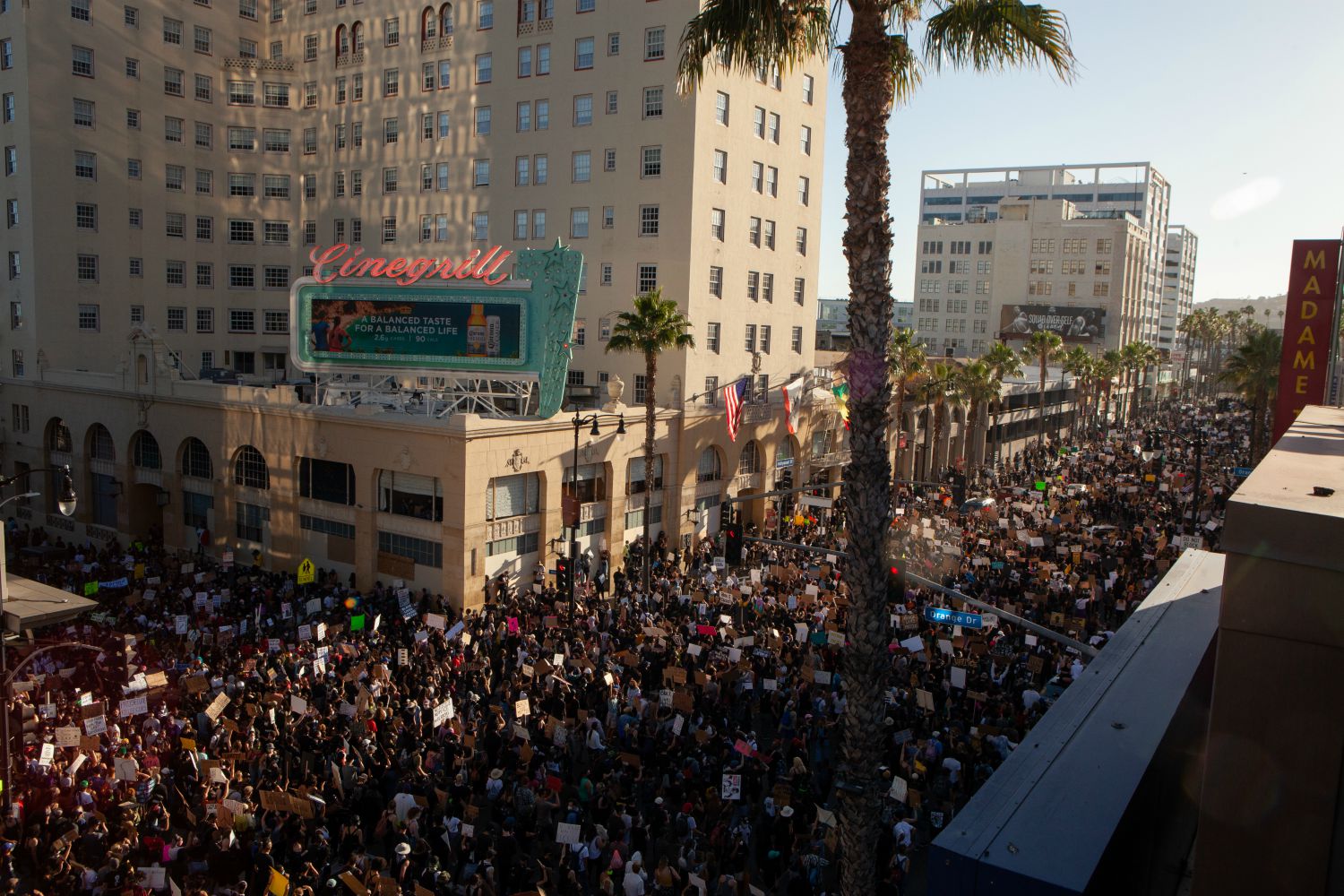 As Many As 100,000 Protesters Gathered in Hollywood on Sunday

After more than a week of protests against police violence following the death of George Floyd, Los Angeles saw its largest demonstration so far flood the streets of Hollywood on Sunday. An estimated 100,000 people attended the march, according to Black Lives Matter Los Angeles, which organized the action along with BLD PWR and the rapper YG. Early crowd size estimates by the LAPD placed the number around 20,000, though the throng of protesters stretched unbroken from the TCL Chinese Theatre all the way to Vine Street and beyond. In addition to the march in Hollywood, Sunday saw dozens of other protests throughout the city, including in downtown Los Angeles, Beverly Hills, and Compton.

Aside from a few LAPD helicopters monitoring the protest from the sky, there was virtually no visible police presence at the march—a marked departure from earlier protests, which saw large numbers of heavily armed police and National Guardsmen. The LAPD has come under heavy criticism for its tactics in those protests, including accusations of misuse of force and conducting mass arrests of peaceful protesters.

A class action lawsuit filed by Black Lives Matter on Friday alleges that the LAPD illegally detained 2,600 peaceful protesters and engaged in “excessive force with batons and rubber bullets, and prolonged handcuffing and improper conditions of confinement.”

The mood on Sunday was alternately festive, impassioned, and defiant.

For Jordan Simpson from Carson, Sunday’s protest felt particularly moving. “We just felt the spirit of the community,” he said. “Everyone was just encouraging and lifting up everyone [else].”

One sign, written in Greek, read “Cops, Pigs, Murderers,” a common refrain at protests in Greece, according to Dee, who didn’t provide a last name.

“I’m glad that it took an anti-capitalist turn and became a movement for defunding the police,” she said about the wave of protests. “Especially in L.A., we see so many homeless people that could benefit from housing services [and] mental health services.”

Actor and activist Kendrick Sampson played emcee for the event, leading the crowd in chants of “Defund the police” and “Jackie Lacey must go,” a reference to the L.A. District Attorney. Sampson has joined protests over the last two weeks, getting shot seven times by LAPD officers using rubber bullets at an action on May 30, he said. A CNN broadcast captured Sampson being repeatedly struck with a baton the same day.

The final speaker for the day was Black Lives Matter Los Angeles co-founder Melina Abdullah, who continued the day’s message of defunding the police and holding police accountable.

“We have the power to end the police as we know it,” she said.